Harley Quinn and the Birds of Prey

By Dave and Adam's Card World on February 7, 2020 in Comic Books

This week the newest film in the DCEU hits theaters with the release of Birds of Prey. One of DC’s first all female led superhero team debuting in 1996, the film stars a new version of the roster featuring the likes of…

Harley Quinn – An original character developed for Batman: The Animated series, this former partner and love interest of the Joker would debut in comics for the 1st time in Batman Adventures #12 in 1993.

The Huntress – One of Gotham’s many costumed vigilantes, Helena Bertinelli would make debut as a cameo in All Star comics #69 in 1977.

Renee Montoya – One of Gotham PD’s most popular detectives, Renee Montoya would work alongside the Dark Knight, starting in his own series with issue #475 of Batman in 1992.

And as always, every good superhero team needs a foil and for the film they’ve tapped longtime Gotham Mobster, Roman Sionis, better known as Black Mask, who debuted in Batman #386 in August of 1985.

In addition to looking for these issues to purchase, we also carry a Birds of Prey themed Hit Parade Comic line which is available for sale right now on our site. 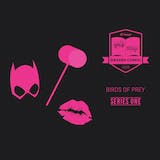