By Dave and Adam's Card World on June 4, 2012 in Collections

Here at Dave & Adam’s we love hearing about your card collections. Meet Tim, a Wayne Gretzky collector – Here is what Tim has to share with us: 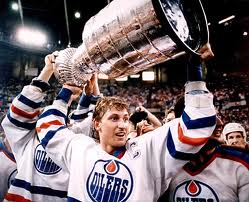 Maybe you collect by sport or by the set. Sometimes it’s the players on your favorite team. In many cases, a parent got you started or there is no rhyme or reason – you just caught the collecting bug and never found a cure.

We have all likely fit into one or more of these categories with our collections at one point or another. When I was a kid I collected hockey cards by the set. But in my teenage years and early 20s I found that focusing on one player made collecting more organized and ultimately – more fun.

The one player I’ve focused my collection on is Wayne Gretzky. If you’re going to collect one player – go for The Great One.

It hasn’t always been cards; From memorabilia like lunch boxes from the 1980s featuring The Great One’s likeness to a childhood lacrosse team photo to a leather golf bag given to players in a Gretzky charity golf tournament – I can’t get my hands on Gretzky memorabilia quick enough.

But the cornerstone of my Gretzky collection has always been his cards, stickers and inserts. For years I collected raw Gretzky cards, just building my collection one card at a time. I’ve always had a goal of owning every one of his cards produced. I’ve been close to accomplishing that, but never close enough. I mean, we’re talking The Great One, not Randy Wood. There are a lot of Gretzky cards out there and they are still being produced nearly 15 years after his retirement. When I considered myself close, I was 100 cards away.

So I refocused from attempting to collect all of his cards to a more attainable goal. I decided I wanted to just collect PSA graded cards, and I would focus on just his rookie year through 1990. That’s his time with the Edmonton Oilers, what some consider his best years. 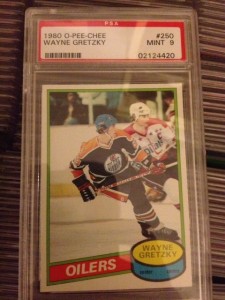 And within that tight window of cards that I collect, I’ve focused even further, collecting just O-Pee-Chee and Topps brand, with a few exceptions of Panini stickers and special inserts like Red Rooster and some other odd-ball issues. 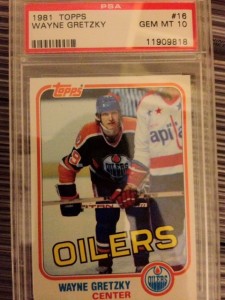 I’ve included a few pictures of some of my favorites. You can see a listing of all of my Gretzky cards at http://www.psacard.com/PSASETREGISTRY/OtherSets.aspx?m=7631

My preference is to deal exclusively in graded cards, especially when it comes to 1980s OPC, where there are lots of counterfeits out there. Third-party grading isn’t foolproof, but it does add a sense of security when dealing in the wild west of online auctions.

With the PSA registry that I linked to above, it’s fun to compete against others who collect the same players for higher grades. You get to know one another and deal with each other. Lately I’ve been selling more than I’m buying, but I’m always looking for a card that will improve my ranking on the registry. And when I upgrade a card, I sell my lower grade and hopefully help improve another collector.

I’d love to talk Gretzky cards and memorabilia or collecting with you at any time. Feel free to contact me.

Gretzky, PSA, The Great One, Topps