Blog Homepage \ Dave and Adam's Buying Team Stories \ The King of Rock & The King of Pop together on one card!

Every now and then our buyers come across a card they purchased and have one of these “oh yeah, I forgot we had this card” moments.

We purchased this incredible card last year from the original owner who pulled it back in 2011 from a box of Donruss Limited Cuts. 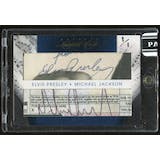 Elvis Presley is arguably the biggest rock-n-roll icon of all time and a star on screen as well.

Not only was Elvis a music star but he was also a star on screen in hits such as Blue Hawaii, King Creole, Jailhouse Rock, Love Me Tender, Viva Las Vegas, and Aloha From Hawaii.

Michael Jackson is THE pop icon.

Beginning his career with his brothers forming the Jackson 5, Michael was clearly the fan favorite and went on to have an unprecedented solo career.

Crowned The King of Pop, Jackson recorded legendary hits such as Thriller, Billie Jean, Beat It, Smooth Criminal, Bad, Black or White, The Way You Make Me Feel, Human Nature, Heal The World, and many more!

Jackson, known for his innovative choreography, owns a star on the Hollywood Walk of Fame in addition to his numurous awards.

Jackson also won the World Music Awards’ Best-Selling Pop Male Artist of the Millennium, the American Music Award’s Artist of the Century Award and the Bambi Pop Artist of the Millennium Award. He was inducted to the Rock and Roll Hall of Fame as a member of The Jackson 5 in 1997, and again as a solo artist in 2001. In 2002 he was added to the Songwriters Hall of Fame. In 2010, Jackson was the first pop and rock ‘n’ roll performer inducted into the National Museum of Dance and Hall of Fame, and in 2014 he was posthumously inducted into the Rhythm and Blues Museum.