Did you not make it to the biggest Star Wars convention in the world this year? Don’t worry we have all of the best exclusives direct right from the manufacturer!

Star Wars Celebration 2019 in Chicago was loaded with exclusive merchandise that you could only get at the convention. Two of the biggest were from Funko and Hasbro who released very limited edition POPs and Black Series figures. Starting with Funko, there was a special set of 8 total Funko POPs which included a set of 6 blue chrome (numbered to 2500) and a new Darth Maul and Watto release. The blue chrome edition POPs have never been done before and include Darth Vader, Boba Fett, Princess Leia, Yoda, Chewbacca and a Stormtropper. 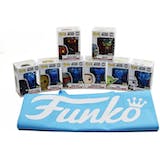 All of the Funko POPs that were sold at this show have a very special Star Wars Celebration 2019 Chicago sticker on the window.

Hasbro had the other very limited exclusive that included a Black Series release of Darth Maul and Obi-Wan. 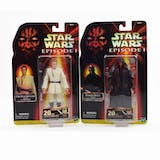 These two figures celebrated the 20th anniversary of Star Wars Episode 1 the Phantom Menace and are on cardbacks that resemble the original release in 1999.

If you are interested in any of these exclusive pieces and have any questions, please contact our toy buyer Tony at [email protected] and he will be happy to help you!

In the meantime…start planning your trip to Star Wars Celebration 2020 in Anaheim!

We’re in the Endgame Now!
FREE Case Giveaways for May!