Our video game and toy buyers have made their way back to the cozy confines of the Dave & Adam’s office after a trip to to Warren, Michigan to check out the Great Lakes Comic Con. Our video game buyer Tony along with our toy buyer Jeff went to the comic con looking for unique items to bring back to Buffalo. Here is a little about what they experienced and some of the great items they found. Take it away Tony!

The buying team arrived in Warren early Friday, February 23rd eager to find out what the area had to offer. The Great Lakes Comic Con did not start until 5PM that evening so we mapped out a bunch of different shops to check out. We went to multiple different comic and video game shops but some stood out from the rest. One of our favorite shops on this buying trip was actually the first that we visited, Time Travelers located in Berkley, Michigan. This shop has it all – including video games, comics, toys, gaming cards and everything in between. There are literally collectibles from the floor to the ceilings and in every direction you look you find something else. We were able to find all sorts of toys, great comics and lots of awesome video games. 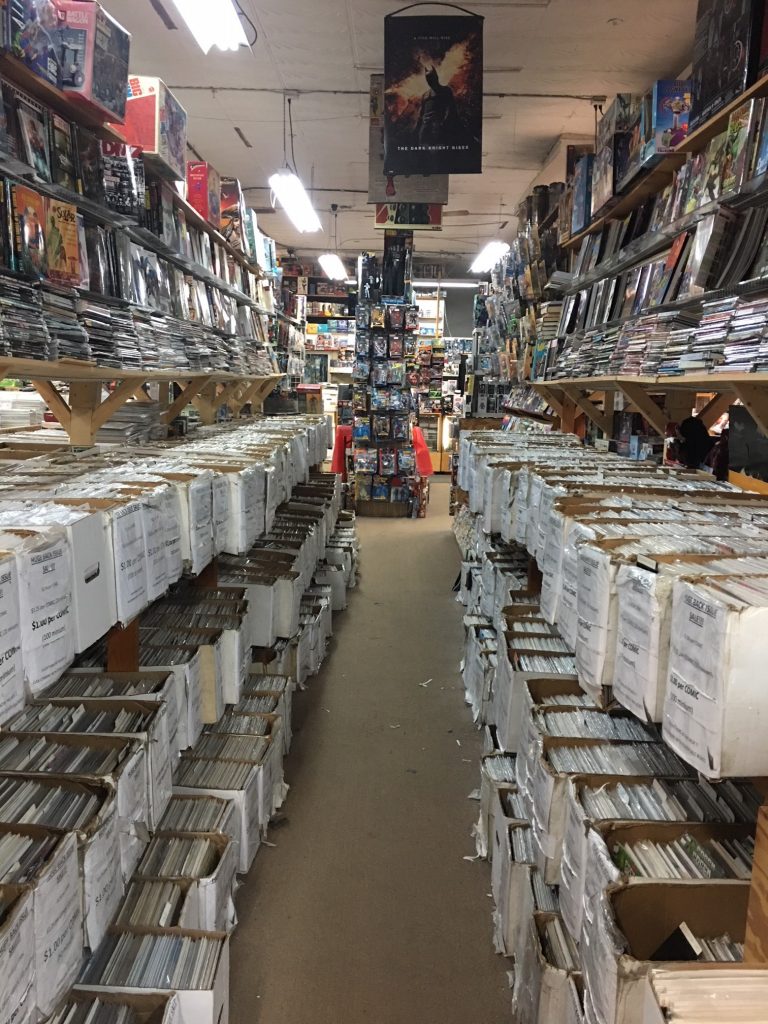 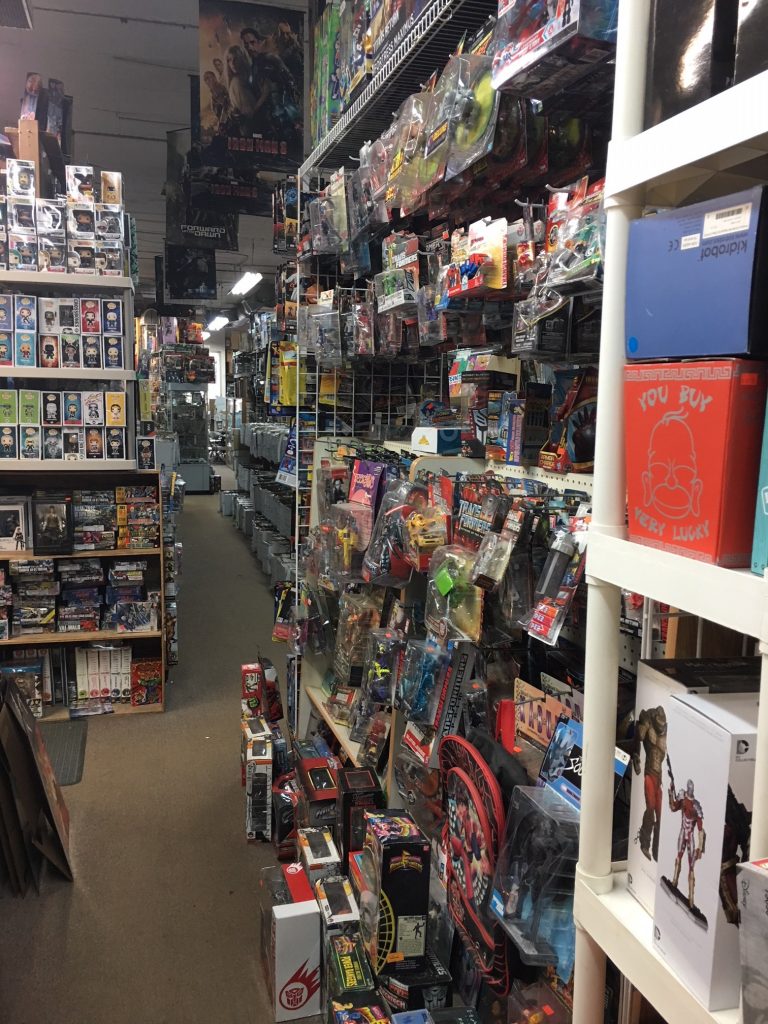 After picking up a few other things here and there the next big stop was a video game store called Retro-Taku Games. This wasn’t a very big store but it was packed with video games everywhere, making it hard to walk! Buried deep in the corner was a showcase filled with high-end video games. Inside that case was a boxed complete (with manual and game) Earthbound! After an inspection of the box and it’s contents there was no way Dave & Adam’s was leaving the shop without it. You do not see the big boxed copies of this game very often so it was a very exciting find! The last shop we would like to mention was a smaller shop called Comics & More but there was some great things in that shop as well, we left with some really hard to find Walking Dead action figures and comic books as well as a bunch of Super Nintendo games. After going to a couple more shops it was time to make it over to the Comic Con. 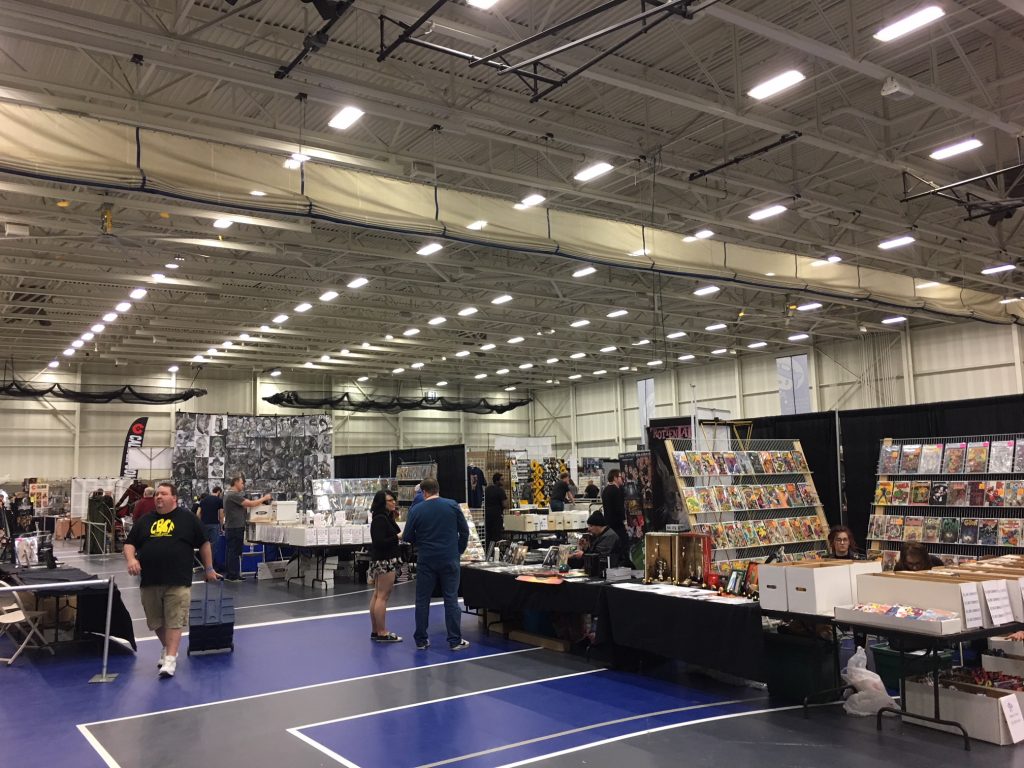 The comic con was huge with a lot of different vendors and some great guests. First we wanted to wait in line to get autographs from some of the celebrities like ‘The Million Dollar Man’ Ted Dibiase, Paul Soles and William Katt for our inventory. After that we hit the show floor to see all of the great things vendors brought with them to sell and showcase. One of my favorite vendors was setup (Super Retro Land) which actually is a store with multiple locations, they have a great selection of games and retro apparel. I was able to purchase a large batch of awesome video games from them including Mega Man, GameCube games and a stack of StarFox Zero. Our toy buyer found a large amount of Funko PoP! figures, wrestlers and comics as well at the show. After finding a few more gems at the show including a boxed complete Mega Man 5 we heard the announcement that the show was closing and had to call it a night. What a Friday in Michigan, being able to check out all of the cool shops, meet some amazing people and find awesome buys! Before heading back home to Buffalo we stop in the show one last time to see if there was anything we missed or anyone brought anything new with them.

The Great Lakes Comic Con was a great show to check out and buy from and we look forward to going back in the area again in the future. All of the video games and systems pictured will be up for sale on our website and in our retail store in the near future. If there is anything you would like more information please email Tony at [email protected] or Jeff at [email protected].

Dave and Adam's is one of the largest sellers of trading cards and collectibles in the world. Located just outside of Buffalo NY, the company operates two retail stores as well as the e-commerce website www.dacardworld.com
View all posts by Dave and Adam's Card World →
2018 Hit Parade Baseball 1967 Edition Out Today!
When Video Games Met Hollywood…