DACW Live gets their hands on TriStar Quest break-exclusive product

TriStar has released a brand new product that promises to offer up some amazing hits, and is being offered exclusively to live breakers.

2015 TriStar Quest will give collectors a chance to land autographed memorabilia from a checklist of 225 different subjects that spans the worlds of sports, entertainment and politics. Autographed items include jerseys, equipment, photos, cut signatures and more.

Cases of TriStar Quest come with three boxes. Each box comes with five envelopes that hold an autograph or a redemption for a signed memorabilia item. TriStar will have special hot boxes, but did not specify what is inside them.

DACW Live has received several cases of 2015 TriStar Quest and will be holding group breaks of it in the coming weeks. For each case break, all three boxes will be opened and the envelopes will be given a number. Each person in the break will be randomly assigned a numbered envelope which they will receive the contents of. Only 15 slots will be sold per break, so everyone involved will receive a hit.

Again, this product was offered exclusively to live breakers, so the only way to get to some of these fantastic memorabilia items is to buy into a break. Check out the DACW Live page to find out when the next break of 2015 TriStar Quest is taking place and to get your slot. 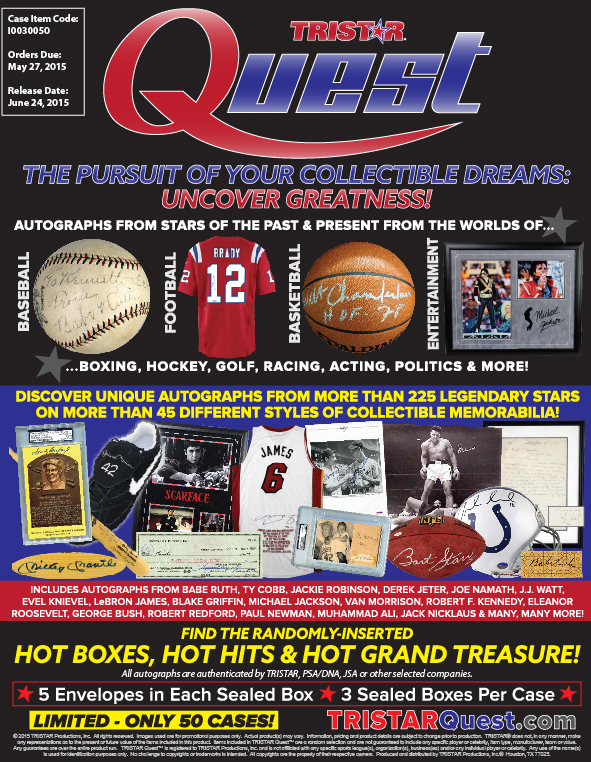 Dave and Adam's is one of the largest sellers of trading cards and collectibles in the world. Located just outside of Buffalo NY, the company operates two retail stores as well as the e-commerce website www.dacardworld.com
View all posts by Dave and Adam's Card World →
2015 Panini Certified Football preview
Panini announces plans for National VIP Party