This incredible Babe Didrikson Zaharias autographed golf pass from a benefit golf match held at the Capital City Country Club.   The pass is also signed by Patty Berg, Louise Suggs, and Dorothy Kirby.  The autographs have been authenticated with a a letter of authenticity from PSA/DNA. 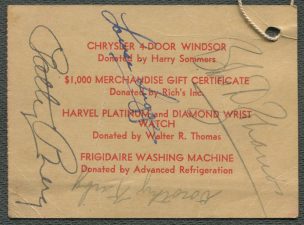 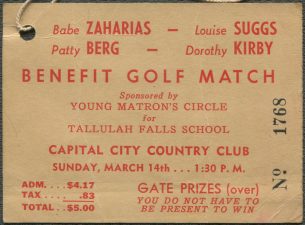 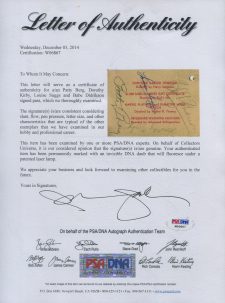 Didrikson gained world fame in track and field and All-American status in basketball. She played organized baseball and softball and was an expert diver, roller-skater, and bowler. She won two gold medals and one silver medal for track and field in the 1932 Los Angeles Olympics.

At the Olympics, in the 80 meter hurdles, she equaled the world record of 11.8 seconds in her opening heat. In the final, she broke her record with an 11.7 clocking, taking gold. In the javelin, she also won gold with an Olympic record throw of 43.69 meters.

In the high jump, she took silver with a world record-tying leap of 1.657 metres (5.44 ft). Fellow American Jean Shiley also jumped 1.657 metres, and the pair tied in a jump off when the bar was raised to 1.67 metres (5.5 ft), but Shiley was awarded the gold after Didrickson was ruled to have used an improper technique.

Didrikson’s first job after high school was as a secretary for the Employers’ Casualty Insurance Company of Dallas, though she was only employed in order to play basketball as an amateur on the company’s “industrial team”, the Golden Cyclones. As a side note, the competition was then governed by the Amateur Athletic Union (AAU). Despite leading the team to an AAU Basketball Championship in 1931, Didrikson first achieved wider attention as a track and field athlete.

Representing her company in the 1932 AAU Championships, she competed in eight out of ten events, winning five outright, and tying for first in a sixth. Didrikson’s performances were enough to win the team championship, despite her being the sole member of her team.
Post-Olympics

In the following years, she performed on the vaudeville circuit, traveled with teams like Babe Didrikson’s All-Americans basketball team and the bearded House of David (commune) team. Didrikson was also a competitive pocket billiards (pool) player, though not a champion. She was noted in the January 1933 press for playing (and badly losing) a multi-day straight pool match in New York City against famed female cueist Ruth McGinnis.

By 1935, she began to play golf, a latecomer to the sport in which she became the most famous. Shortly thereafter, she was denied amateur status, and so, in January 1938, she competed in the Los Angeles Open, a men’s PGA (Professional Golfers’ Association) tournament, a feat no other woman tried until Annika Sorenstam, Suzy Whaley and Michelle Wie almost six decades later. She shot 81 and 84, and missed the cut. In the tournament, she was teamed with George Zaharias. They were married eleven months later, and lived in Tampa, Florida, on the premises of a golf course that they purchased in 1951.

She went on to become America’s first female golf celebrity and the leading player of the 1940s and early 1950s. If she had wanted to gain back her amateur status, she would have had to play no other sports for three years. After gaining back her amateur status in 1942, she won the 1946 U.S. Women’s Amateur and the 1947 British Ladies Amateur – the first American to do so – and three Women’s Western Opens. Having formally turned professional in 1947, she dominated the Women’s Professional Golf Association and later the Ladies Professional Golf Association, of which she was a founding member. Serious illness ended her career in the mid-1950s.

Zaharias won a tournament named after her, the Babe Zaharias Open of Beaumont, Texas. She won the 1947 Titleholders Championship and the 1948 U.S. Women’s Open for her fourth and fifth major championships. She won 17 straight women’s amateur victories, a feat never equaled by anyone. By 1950, she had won every golf title available. Totaling both her amateur and professional victories, Zaharias won a total of 82 golf tournaments.

Charles McGrath of The New York Times wrote of Zaharias, “Except perhaps for Arnold Palmer, no golfer has ever been more beloved by the gallery”.

While Zaharias missed the cut in the 1938 PGA Tour event, later, as she became more experienced, she made the cut in every PGA Tour event she entered. In January 1945, Zaharias played in three PGA tournaments. She shot 76-76 to qualify for the Los Angeles Open.[9] She then shot 76-81 to make the two-day cut in the tournament itself, but missed the three-day cut after a 79, making her the first (and currently only) woman in history to make the cut in a regular PGA Tour event. She continued her cut streak at the Phoenix Open, where she shot 77-72-75-80, finishing in 33rd place. At the Tucson Open, she qualified by shooting 74-81 and then shot a 307 in the tournament and finished tied for 42nd. Unlike other female golfers competing in men’s events, she got into the Los Angeles and Tucson Opens through 36-hole qualifiers, as opposed to a sponsor’s exemption.

In 1948, she became the first woman to attempt to qualify for the U.S. Open, but her application was rejected by the USGA. They stated that the event was intended to be open to men only.