By Dave and Adam's Card World on April 1, 2009 in Athletes, Upper Deck

Upper Deck has announced a Michael Jordan Legacy collection set that will be featured in 4 different basketball releases. The first product you can find the cards in is 2008/09 Upper Deck Lineage Basketball, which just went live. The other three with scheduled release dates are Radiance (April 29), Upper Deck (September 22nd), and First Edition (September 29th).

The set is 1170 cards, chronicling every single Chicago Bulls game MJ played in from his NBA Debut on October 26th, 1984 through his game clinching heroics in Game 6 of the NBA Finals on June 14th 1998. Also randomly inserted are100 different game-used Michael Jordan Memorabilia Cards, each one numbered to 23.

Here is an official quote from UD and some card images:

“Michael Jordan has meant so much to the Upper Deck Company for the better part of the past two decades that it’s only fitting that we do something special to celebrate his incredible career,â€ said Jason Masherah, Upper Deck’s director of Sports Brands. “With his Hall of Fame announcement right around the corner, now is the perfect time to salute one of Upper Deck’s longest-tenured spokesmen and most popularathletes of all time.â€

With all of the memorable games Jordan has played for the Bulls, checking out the box scores on these cards could be a lot of fun for Jordan collectors and fans. It will also be fun to see this set put together. 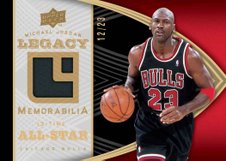