Blog Homepage \ Action Figures \ The Star Wars Toys That Started it All!

The Star Wars Toys That Started it All!

By Dave and Adam's Card World on February 12, 2020 in Action Figures

Want to see the first ever Star Wars Action Figures?!

You could not buy these action figures in the store like today…:

The only way you could get these action figures in 1978 is by sending in a mail away offer to Kenner which they would in turn send you the action figures when production was completed. What is the reason for this back in the late 70’s? Here is a little information on this set…

This set was based off the first Star Wars feature film A New Hope which was released in May 1977. During the production of the film George Lucas did not want to provide character and vehicle designs to Kenner for action figures in fear of plagiarism. Kenner tried to get their Star Wars toys out by the holiday season of 1977 but when they realized they could not meet the demand, Kenner offered an ” Early Bird Certificate Set”. Once the certificated was mailed it, Kenner would redeem it for four Star Wars action figures (Luke, Leia, Chewbacca and R2-D2).

This specific early bird kit has all four action figures still in the bags and has been sub-graded an 85. The Luke Skywalker is a variant figure and has a double telescoping lightsaber. The overall grade on the set is a 70 EX+ and the sub-grades are (B60 W80 F85) 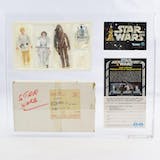